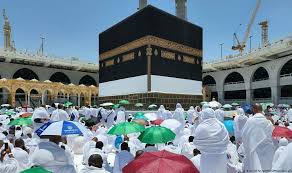 The National Hajj Commission of Nigeria (NAHCON) has said the 36 states and Federal Capital Territory (FCT) pilgrims welfare boards as well as armed forces will share 75,000 of the 95,000 slots of hajj seats allocated to Nigeria.

In a statement on Monday, the commission’s Assistant Director Information and Publications, Mousa Ubandawaki said the remaining 20,000 would be allocated to private tour operators.

Ubandawaki said the decision arose during the signing of a Memorandum of Understanding for the 2023 Hajj between the NAHCON and the Saudi Ministry of Hajj at a ceremony in Jeddah Saudi Arabia.

“The Minister of State for Foreign Affairs, Ambassador Zubair Dada, signed the document on behalf of Nigeria and was witnessed by Chairman/ CEO of NAHCON, Alh. Zikrullah Kunle Hassan; the three executive commissioners: Alh Nura Hassan Yakassai, Alh. Abdullahi Magaji Hardawa and Sheikh Suleman Mommoh; board members and staff of the commission.

“On the sideline of the Mou, the delegation met with the Mutawwif of African Non-Arab whose chairman, Ahmad Sindi, assured the country of its readiness to make the 2023 Hajj better than the previous years.”

He added that the agency in a bid to create more rooms and space for pilgrims had adopted the double deck bed at the Mashair for some countries this year.

He, therefore, urged the participating countries to work assiduously to achieve a hitch-free Hajj 2023.

Daily Focus reports that the Kingdom of Saudi Arabia has increased the number of pilgrims for the country to 95,000, and also lifted the Covid-19 test and age barriers as in the case of the 2022 Hajj Excersice.