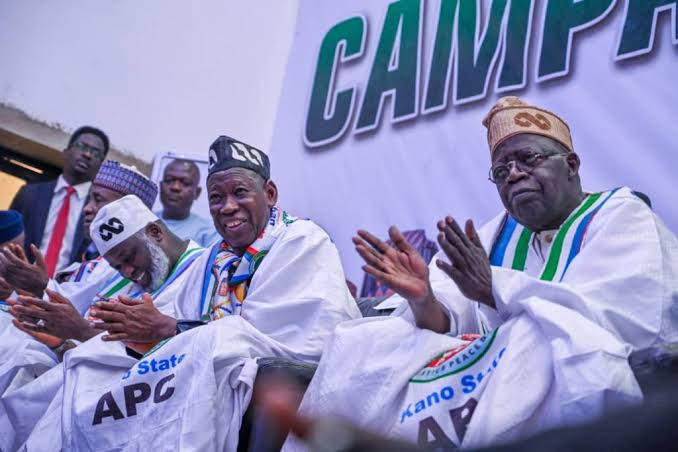 More than 5000 football clubs comprising over 100,000 youths came out in large numbers today to welcome the All Progressives Congress (APC) Presidential candidate, Sen. Bola Ahmed Tinubu who landed in Kano for his candidacy campaign.

The youths escorted the caravan of Tinubu from Kano State Government House to the Sani Abacha Stadium where the campaign rally is scheduled to hold.

The Director of North West Tinubu/Shettima campaign support group, Baffa Babba Dan Agundi, in a statement issued to reporters on Wednesday explained that the youths were jubilating and throwing football to Tinubu’s caravan chanting “Jagaban for Nigeria”.

According to Baffa, the development was a result of a football match organized by Kano Pillars and Super Eagle legends which were supported by the Kano state government under the leadership of the Director of the North West Tinubu/Shettima campaign support group.

“After the match, the Super Eagle legends were seen snapping pictures with a lot of fans, and at the end of the day, urged them to vote Bola Ahmed Tinubu”

“The result can be vividly seen by the massive turnout of over 5000 registered and unregistered football clubs who came out to receive Tinubu” He added.

Dan Agundi revealed that happiness can be easily seen in the face of Tinubu, Governor Ganduje and other Governors who accompanied him to the campaign in Kano today.

The Director Northwest support groups assured the APC Presidential flag bearer of victory as well as the football clubs that they will also be carried along as seen in Gov. Ganduje’s administration, as youths and sports were treated with priority.

“More will be done come Dr. Nasiru Yusuf Gawuna’s administration if elected as governor of Kano state. Because he was also a footballer” He noted.

The Director of Northwest support groups thanked the football clubs and other support groups for the wonderful outing to display support for Bola Ahmed Tinubu by wearing the Tinubu signature and assured them that the government will work in collaboration with them if victory is obtained.