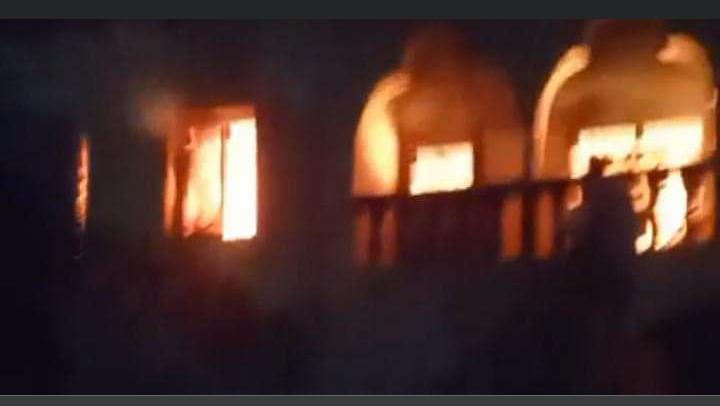 Three children have been trapped to death after a night fire gut their house at Kabuga area of Gwale Local Government in Kano metropolis.

The fire outbreak which was suspected to be from electrical fault occurred around 10pm on Monday and claimed the lives of the children when their father was away from home.

Eye witnesses told Daily Trust that their mother died three years ago and that they are leaving with their aunty who is also around 11 years.

Their neighbor, Abubakar Ahmad said “Two of them are the children of Malam Zakariya (Abdul and Saddiqa of about 8 and 5 years) while the other girl is his sister (Fatima, 11 years), he brought her to look afte them since the death of their mother few years ago.

“We were all about to sleep when the light went off, not knowing that it was as result of electrical fault from the house. The next thing we heard was the call for rescue from their neighbor who lives in the downstairs while they are in the upstairs.”

According to him people came out for rescue but not all are aware that the children were inside the house.

“We didn’t know they were inside because we asked their neighbor he said he didn’t know. Until when their father came back that was the time he confirmed to us that they were locked inside.”

He said with the help of resident and Fire Service, they were able to quench the fire but couldn’t rescue the three children alive.

“It was tragic, I have never seen something like this in my life. We felt very bad honestly, we felt bad. We didn’t know they were inside, we could have rescued them alive,” he said in worries.

The deceased were buried according to Islam teaching on Tuesday.

Meanwhile Spokesman of the Kano Fire Service, Saminu Yusuf Abdullahi confirmed the incident, adding that the cause is under investigation.