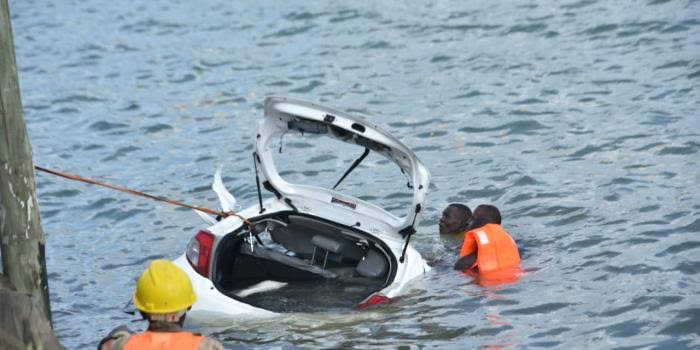 Nine people have been confirmed dead, three others rescued, while one person declared missing as a motor vehicle (Golf Wagon) plunged into a Dam along Kano-katsina road, Gwarzo local government area of Kano state.

The tragic incident which occurred on Saturday, was as result of tire burst which led to lost of control from the driver and further plunging into the dam, located by the road side.

Confirming the incident, Public Relations Officer of the Kano State Fire Service, Saminu Yusuf Abdullahi said on Saturday, the service received an emergency call through one Ali Mai Faci, at about 6 pm.

According to him, he reported an incident of a Golf Wagon with an unknown registration number, coming from Kano heading to Katsina, falling inside the Fada dam along Gwarzo-Dayi road.

The PRO explained that when their men from the Gwarzo fire station reached the area at about 7 pm, twelve people from Katsina state were rescued, all with unknown names.

“With good effort of our men and local fishers we successfully rescued three persons alive, while Nine people unconscious and conveyed all victims to Gwarzo General Hospital for medical attention and doctors confirmed the dead of 9 people among the victims.

He added that according to eye witness one victim is expected remain inside the dam.

“We will continue searching as normal. Cause of the incident is tire blast which led to losing of control.”