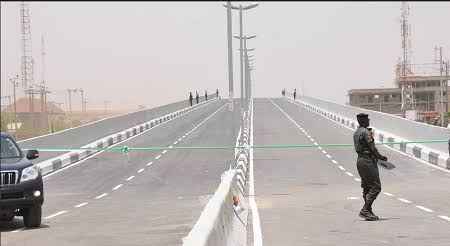 The Federal government has assured that the repair of  Ado Bayero Flyover, known as Gadar Lado in Kano, will be completed in two months time.

The Federal Minister of Works and Housing, Alhaji Umar Ibrahim El-Yakub, stated this when he went to oversee the bridge repair work which is being carried out by the Ministry.

He said considering the significant role of the bridge to the people of Kano state, the bridge will be repaired that it can last for long without further damages.

Read Also: FRSC flags off ember months campaign against over speeding in Kano

The minister represented by controller of works Kano, Engr. Yahaya Baba Ali, express  satisfaction with the level at which the bridge is repaired and it quality.

El-yakub urged the public to avoid breaking the barrier that is placed on the bridge that prevents heavy vehicles from passing, adding that is the only way it secured and last longer.

Daily Focus reports that since the breakdown of the bridge, motorists have been experiencing difficulties reaching their various places as a result of traffic gridlock within the area.