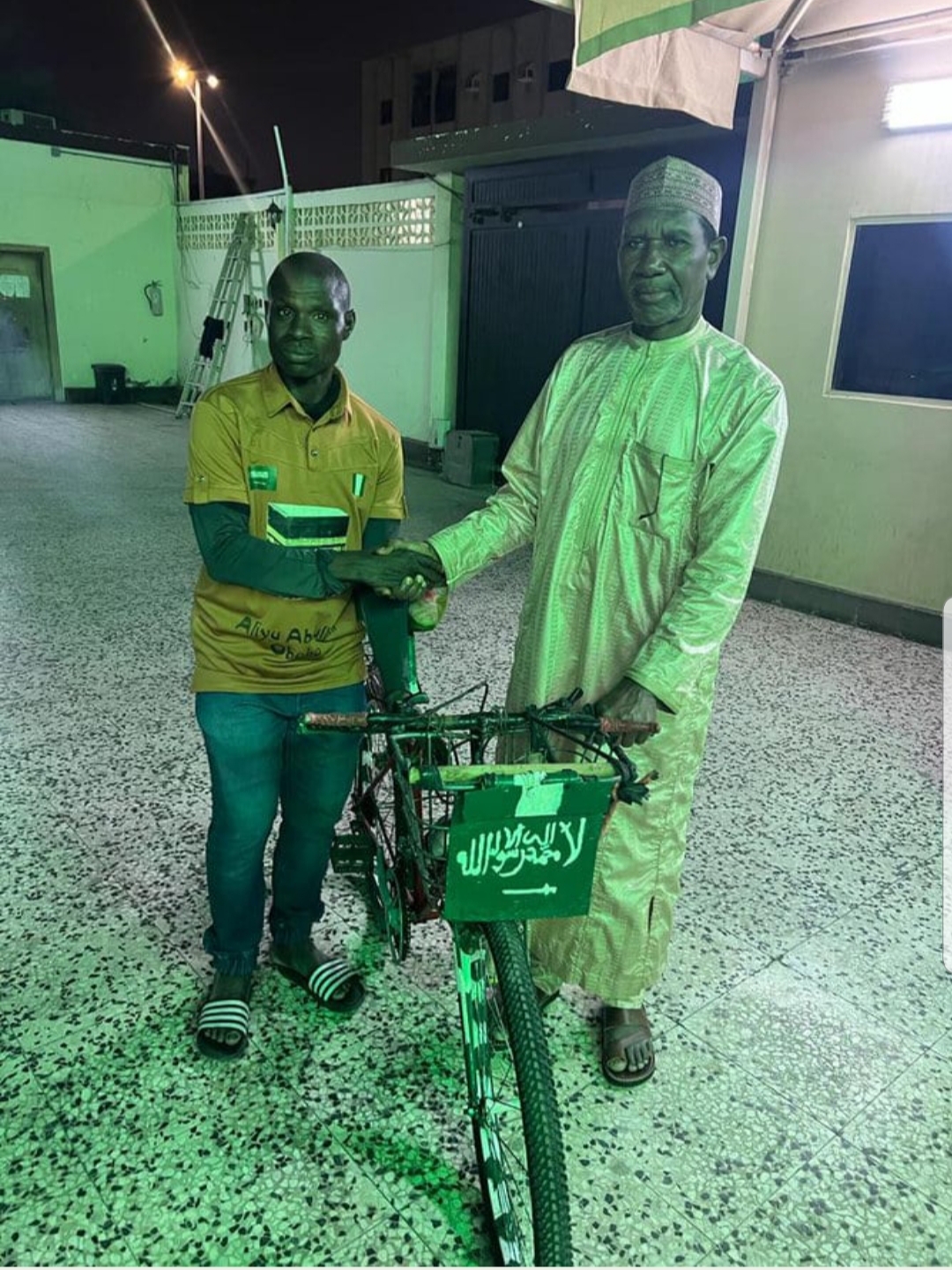 A young Nigerian cyclist, Aliyu Abdullahi Bala has reached the Kingdom of Saudi Arabia after two years to perform Umrah in Makkah and visit the Prophet’s Mosque in Madinah.

Bala, who started the journey on bicycle from Jos Plateau State,  arrived in Jeddah on Dec. 8, and was warmly welcomed by officials from the Consulate General in Jeddah on behalf of Nigerian Ambassador Yahaya Lawal.

Lawal told Arab News: “He was given all possible consular assistance, guidance and encouragement. The consulate facilitated his onward journey on his bicycle to the holy cities of Makkah and Madinah.”

The Nigerian Embassy also said in a statement: “Nigerian Mission warmly welcomes the bicycle man from Nigeria into the Kingdom, who left Jos, Plateau State in February 2021, for Umrah in Makkah and a visit to the Prophet’s Mosque in Madinah, and arrived in the Kingdom safely in the fulfillment of his vow and mission.”

Later, the ambassador met the Nigerian cyclist when he returned to Jeddah after visiting the Prophet’s Mosque in Madinah.

Talking to Arab News by phone, arranged by the ambassador, an emotional Bala said: “This was like my journey of a lifetime, it was my dream coming true, all thanks to the Almighty Allah for giving me the courage to perform the important religious rituals, no matter how difficult it was to drive through the holy cities from the western African coast. I am also thankful to the Nigerian Embassy and the Consulate for all the support and moral encouragement.”

Bala, who is the first person to undertake such a journey from Nigeria in modern times, has been in high spirits since he arrived in the Kingdom.

The cycling enthusiast survived numerous obstacles and dangers on his arduous journey that began in Nigeria on the western coast of Africa and passed through Niger, Chad and Sudan before arriving at his destination.

He encountered threats from insurgents, bandits who took his mobile phone, and wild animals.

However, Bala was gifted a new mobile phone by the generous people from a small town in Sudan after he shared his horrifying experience about the bandits.

Bala, who often slept in bushes, also pushed his bicycle for kilometers when he had a flat tire.

He was treated as a role model by many on his way. Bala said: “I was given a hero’s welcome in all the cities and towns I passed through,” receiving donations and support from people.

He reached Ayesha Mosque in Makkah on June 26, where a huge crowd of pilgrims, local residents, and his two daughters, who had flown from the UK, welcomed him in the holy city.