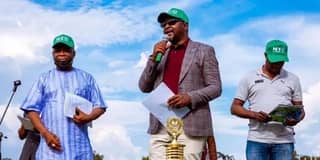 The 7th Edition of the National Youth Games (NYG) earlier scheduled to hold in Asaba, the Delta State Capital from February 8-18, 2023 has been postponed .

The Permanent Secretary, Federal Ministry of Sports and Youth Development, Alhaji Ismaila Abubakar stated that the postponement is due to logistics and time constraints, especially, taking cognisance of the commencement of the General Elections slated for February 25, 2023

In November last year the Federal government announced that the University of Ilorin will host this year’s annual national youths game for the sixth time in a row. The first edition was hosted by Abuja and since then Kwara state has been the hosting state.

No fewer than 27 sports were to feature at the 7th edition of the National Youth Games.

The Games are designed to discover athletes that will be nurtured to stardom, the games are; Athletics, Gymnastics, Para – Table Tennis, Badminton, Handball, Boxing, Basketball, Hockey, Table Tennis, Beach Volleyball, Karate and Tennis.

While regretting all the inconveniences the postponement might cause its stakeholders, Alhaji Ismaila assured that a new date for the Games will be announced after the elections.