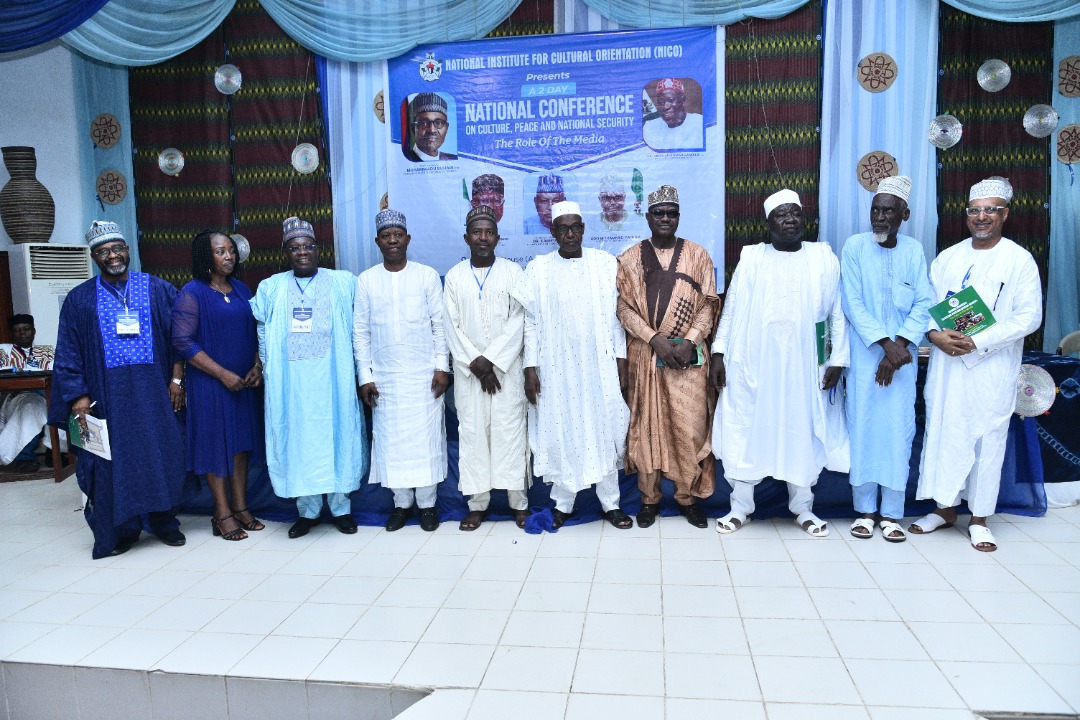 Media organizations have been urged to promote conflict resolution through cultural practices which emphasize respect, tolerance and collaboration with a view to achieving peace, security of lives and properties in the country.

The scholars and stakeholders made the call at a two-day national conference on Culture, Peace and National Security: The Role of the Media organized by the National Institute for Cultural Orientation (NICO) at Aminu Kano Centre for Democratic Studies, (Mambayya House) in Kano.

Professor Mahmud Lawan of the Department of Political Science Bayero University Kano said there was a need for reorientation through intensification of diverse cultural endowments in the country.

He said the younger generations should be taught, imbibe and internalize cultural practices which emphasize respect, tolerance, peace and security of lives and properties. Nigerians should copy from the people of Rwanda, after the 1994 genocide, where over half a million Tutsis and Hutus were massacred. The Rwanda people adopted GACACA, which was an alternative justice system, derived from the traditional African justice system.

“The GACACA focuses on reconciliation and restoration in order to reestablish social harmony in the society. Therefore, we have huge potentials from cultural endowments to help us attain sustainable peace and security in Nigeria,” he said.

The Executive Director, National Film and Video Censors Board, Alhaji Adedayo Thomas called on the media and general public, especially those armed with smart phones, to be watchful of the messages they receive and share.

He said despite challenges, the country was unbroken  and therefore urged journalists to report only stories that promote peace and unity in the country adding that “when you do that you are helping yourself; you are also helping your immediate and expanded community.”

On her part, Dr Hajara Umar Sanda of the Department of Mass Communication, Bayero University Kano said morally viable Nigerian society was possible when parents instill strong moral values in their children and that would curb the level of moral decadence which had been aggravated by the coming of social media.

She indicated the necessity of moderating social media use through legislation to prevent crises and easily resolve conflicts in the country.

Collaborating with Dr Sanda’s position, Kabiru Lawanti of the Department of Mass Communication, Ahmadu Bello University said fake news and hate speech were proved to be part of the major challenges to Nigeria’s national security.

“The problem is compounded by social media because of the technologies’ ease of use in terms of copying, sharing and lack of gate keepers. While Nigeria respects free speech, it is important to let everyone know that safety and security of Nigeria is paramount. There is a need for both legislative and non-legislative measures to address the problem,” he said.

Lawanti advised that people should be made to take responsibility for their actions and laws should be enacted to hold political actors, advertisers, advert agents and media organizations and Nigerians in general responsible for what they say, write or publish.

Professor Mansur Ibrahim of the Department of History, Maitama Sule University said there was a need to encourage mass media to be nationalistic in outlook and punish sensationalism and bad press.

In his submission, Bala Muhammad of the Faculty of Communication, Bayero University Kano called on the media to use cultural values in sensitizing youth for harmonious relationship in the society and security agencies to handle people who are causing crises anywhere in the country unfeelingly.

Minister of Information and Culture, Alhaji Lai Mohammed said the conference, which focused on the role of the media was well conceived and could not have come at a more auspicious time in the wake of security challenges bedeviling the country.

Represented by Director, International Cultural Relations, Memunat Ladi Idu-Lah, the minister appealed to the media practitioners to accord national interest priority in the discharge of their constitutional and professional duties.

The minister said the war against insecurity should not be left to the government alone. All hands must be on deck to win the war and overcome the security challenges which had become impediments to the country’s national development.

He said, “It is against this background that the role of critical stakeholders especially the media cannot be overemphasized. The phenomenon of fake news, hate speech and misinformation has the capacity to worsen the security situation. They not only create fear among the citizenry but can also adversely affect the morale of our society and security personnel.”

In his address, the NICO’s Executive Secretary, Ado Mohammed Yahuza said mass media were important stakeholders in the promotion of culture of peace and non-violence adding that the media could play a leading role in the fight against insecurity by consistently sensitizing the public to appreciate that there could be no development in an environment of violence and criminality.

Establishing cordial relationships between the media and security agencies with a view to promoting mutual aid, enhanced relations and making the role of the media in conflict prevention and its resolution easier was part of recommendations at the end of the conference.