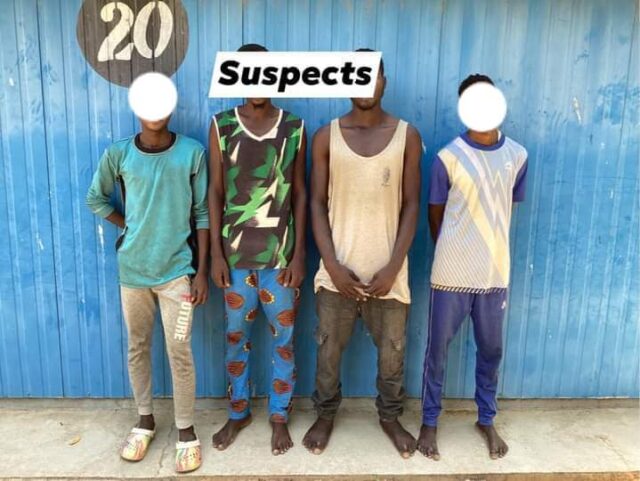 The Jigawa Command of the Nigeria Security and Civil Defense Corps (NSCDC) has arrested four over alleged armed robbery, burglary and trespass.

Shehu said the suspects, aged between 22 and 30 were arrested after they allegedly conspired and burgled into the residence of one of the NSCDC personnel in Dutse Local Government Area.

“The suspects, aged between 22 and 30 and residents of Takur Adua, Unguwar Gabas and Unguwar Barebari in Dutse LGA were arrested on Oct. 14.

“The suspects conspired and forcefully gained entry into the house of one Umar Yunusa, a Staff of the NSCDC on Sept. 24 around 2 a.m. when he was asleep.

Upon hearing their movements, he woke up and engaged them in a fight.

“But when he realized that they were in possession of dangerous weapons, he shouted for help, an action that scared and made them to run away. Luckily, they left an exhibit, a head warmer which was used in apprehending one of them and subsequently the rest of the ring members,” he said.

The PRO alleged that on the same date, the suspects burgled into the residence of one Abdulfatahi Sulaiman of the same address at about 1:30 a.m. and robbed him of N15,000 cash and mobile phone valued at N55,000.

According to him, when interrogated, the suspects mentioned name one other person they connived with and trespassed into the residences of Ejike Nicholas and Fahad Hassan on  Aug.17 Sept. in the same area and stole a laptop computer and Plasma TV.

“They also confessed to be terrorizing Takur, Addu’a and its environs using cutlasses and knives to steal from the residents,” Shehu added.

He said investigation into the case was still ongoing after which the suspects would be charged to court.