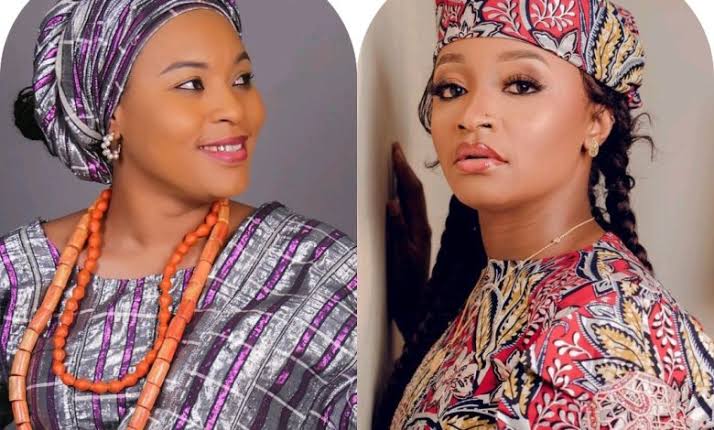 There was exchange of words between two popular Kannywood actresses, Rahma Sadau and Mansurah Isah over the recently released list of Women Campaign Council for the Bola Ahmed Tinubu Presidential Campaign in the All Progressive Congress (APC).

The incident started when Rahma Sadau distanced herself from the list which include 33 Nollywood and Kannywood stars, in which her name appeared in.

In a swift response via her verified Twitter account, the movie star said she is not part of the list, claiming it was a “big fat lie”.

She tweeted, “THIS IS A BIG FAT LIEEEEE… I AM NOT AWARE OF THIS… I DON’T KNOW HOW MY NAME MADE IT TO THIS LIST, NOT IN ANY WAY ASSOCIATED WITH THIS.” (sic)

However, reacting to Rahama Sadau’s statement in an Instagram post, Mansurah, who was also enlisted in the entertainment category, called out Rahama, noting that although the latter’s photo was included in the report, the name in the list was another Kannywood actress named Rahama MK and not Rahama Sadau.

She wrote, “Dear Rahama, the name you saw on the list wasn’t yours in the first place. It was RAHAMA MK’s name and since they only knew you as Rahama from Kannywood, so they assumed it was you, But never mind, it is not you.”

Meanwhile, responding to the message of her colleague, Sadau noted that Isah’s ‘superiors’ have called her to apologize privately.

Sadau wrote, “Dear Mansura Isa, I would advise you, let this go because your superiors called ‘privately’ to apologise for an ‘intended mistake’. You don’t need to be anybody’s mouthpiece. Ciao.”

Daily Focus gathered that as the 2023 elections campaign kicked started few days ago, politicians from different parties are eyeing the movie stars to woe votes and support for them during the elections to reach the success level.