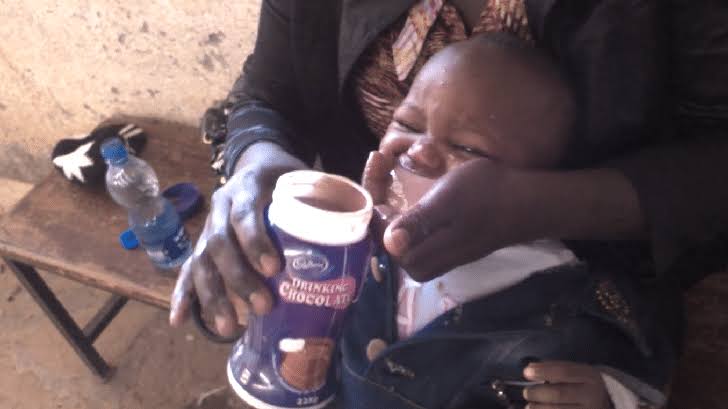 In Nigeria and Africa by extension, force-feeding has been overlooked for years despite laid down child care health policies. Mothers’ quest  to see their children chubby, healthy and fattened, have only left their hearts with torrents of guilt knowing that they should have thread the right course of orthodox feeding rather than employing by-passed methods. It is a common practice in developing countries and it is erroneously done to wards at a period they can’t feed themselves which is from two months to two years.

Children usually go through this dangerous phase of oral drenching when they have an aversion towards a particular food or have feeding problems. Some mothers usually subject their wards to this intrusive practice and consistently undermining the body language thereby keeping aside precarious consequences.

Dr. Udah Christopher Inalegwu, a resident doctor with the department of Pediatrics, Usmanu Danfodiyo University, Sokoto (UDUS) said in the recent survey, “Force-feeding is putting food into the baby’s mouth and forcing them to swallow. It is a dangerous cultural practice in Africa and has been passed down from generation to generation through socialization agencies. It is intended for the child, but it is very dangerous and potentially life threatening”.

“I inherited Force Feeding from my mother”

Like many African mothers, Amina, a housewife in Maitumbi, Minna, Niger State says she won’t care to force-feed her child because her mother did the same to her and nothing happened…

“My Mama force feed me and I no die, and I go force feed my Pikin, him too no go die, I wan make he big and make he dey healthy”, she said in pidgin language.

Amina believes that children do not understand their body requirements, that they are more aware of their children’s needs for food.  This shows that most mothers are concerned about the well-being of their wards, so they choose to force-feed them thinking it benefits them.

“For me,” Dr. Christopher further explained. “Force-feeding is not normal, a child will eat when he is hungry, he will cry and be uncomfortable until you notice he is hungry, so there is no point to force feed these children especially when they do more harm than good.”

Dr. Christopher analytically elucidated, “There are two tubes in the throat, the esophagus for food and trachea for air and breathing. Normally, when a person eats, the breathing and swallowing are coordinated such that the food goes to the esophagus and air to the trachea. If the child in the process is being choked and forced to breathe and swallow at the same time, there is a high chance the food will go through the windpipe thereby obstructing the child’s breath which can potentially kill the child if not treated immediately”.

Why mothers force-feed their babies

It is salient to emphasize that you should respect your children and not force feed them because you may be trampling on their human right.The prevalent practice of mothers force feeding their children is improper.

Generally, force feeding is dominant among impatient mothers whether schooled or unschooled. They strive to see your wards stronger and healthier without putting much effort into trying to understand what they like or dislike. It could be the taste of Lady B’s custard that sways them off but the thoughts of Checkers custard sits well with them. Just like adults, children need to be studied to determine what they abhor.

Force feeding can decompose a child’s development, leading to health risk and psychological effects. It worsens the child’s health status, even though you often try to prove your innocence that you cannot watch them starve. Force-feeding can also trigger pneumonia, “The food can go to the lungs and cause what is called aspiration pneumonitis causing inflammation and infection of the lungs which prevents proper breathing and gas exchange, this is a life-threatening condition and if untreated can kill the child,” Dr. Christopher added.

Force feeding can lead to an unhealthy eating habit or make wards develop a strong aversion towards food. They may also lose control over their eating habits by eating anything whether they are hungry or not as experts presumed.

Some parents go as far as blackmailing their children to eat or compare them with other children, this can make a child grow with low self-esteem leaving within them emotional contours.

Force feeding babies can lead to many consequences ranging from physical, emotional and physiological issues as aforementioned. If your child eats less or is picky, don’t panic, It could be the child has preferences. Allowing your wards decide their meals, meal times may help in inculcating good eating habits in the child.

Secondly, patience is an attribute found in few mothers. If the child gets distracted, try to gain his attention back. When introducing a new food or solid food, know that they need time to adapt.

Eat with your child, this will encourage the child to eat more. Force feeding kills their appetite and further makes them repulsive towards that particular food or eating generally.

I hold an opinion that the Government should synergies with the World Health Organization (WHO) to organize seminars and symposiums that will educate mothers on how detrimental force feeding is in the lives of their wards at both infantry stage and in their primes.

The need for more surveillance and supervisory practice on child care practices and social media sensitization on the adverse effects of force feeding.
Government should help mothers, especially the less privileged mothers with infants’ food or their prices should be slashed to a more subsidized rate.

The popular dictum postulates that “Babies are the Nutritionist’s biggest challenge’’, you should always remember your baby’s stomach is as small as a shooter marble, hence, they don’t need much food.  Small amounts of food are fine so long they develop inclinations as their taste buds are evolving, they may one day grow love for the food they had initially rejected. Therefore, optimal feeding strategy should be administered to children in terms of quality and quantity of food, feeding frequency and duration of attention and care.